You probably remember 19-year-old actress Alexa Vega as a very young teen in the Spy Kids films or maybe you caught her later on in the high school comedy Sleepover. Alexa is growing up very nicely and is taking on a more adult look in various indie films. She’s still working her music and played Penny Pingleton on Broadway in “Hairspray” last year. She plays hot to trot Holly, a 1999 high schooler cruising for older guys in the slice of life indie Remember the Daze. Alexa’s original dark good looks have lightened up with a flattering streaked, blondish “do”.

We sat down with the star for an exclusive chat in the back garden of Point De Vue Salon, in West Hollywood where she and the entire femme cast of the film were meeting to get hair and make-up done for the premiere. Everyone arrived very dressed down; no make-up. Alexa was cute in Pink sweat pants from Victoria’s Secret, gray hoodie, Ugg boots, hair pulled back. She said she’d forgotten her “Skittles” candy and her deodorant… both very needed items.

For this young cast (including “Gossip Girl’s” Leighton Meester, Melonie Diaz (of Be Kind, Rewind) and Amber Heard (Never Back Down), careers have blown up since they shot “Daze”. We learned that the movie served as a surrogate high school experience for many of them. After reminiscing about meeting on the set of Sleepover a few years ago, we are off and chatting….

TeenHollywood: First, after Spy Kids, do you still hear from Robert Rodriguez?

Alexa: I just phoned him yesterday. I talk to him every day. Every day since Spy Kids.

TeenHollywood: Do you think you’ll eventually do another film with him?

Alexa: Hopefully. He’s putting together some projects now. My little sister was in Sin City. She played the young Jessica Alba. We’ll see what comes along. He’s like my dad. I call him Bobby.

TeenHollywood: Have you ever been the younger girl chasing the older guys in school like your character Holly?

Alexa: Oh my gosh, totally. I went to regular high school for a little bit. I’ve always been into older guys because I think there’s a maturity level that’s different. When you grow up in the business you’re just so used to being around adults and it’s really hard to find a guy your age that’s on the same level you are. But, at the same time, that gets you into more trouble because I’m still young and innocent and the older guys are just old skeezes so you have to be careful. I’m going to take my time, let things play out and don’t rush into anything.

TeenHollywood: So you won’t be prowling in your car looking to hook up with hot older guys?

TeenHollywood: Can you relate to any of the happenings in this film? These kids are just wasted 24/7.

Alexa: After my freshman year of high school, I asked to leave. Even the making of this movie was more like my high school experience because I never went to the high school parties. I’m the weird 19-year-old in Hollywood. I haven’t tried alcohol or done any stuff. It has a lot to do with good morals and I’m not ready for that stuff and when it comes time to, I’ll do that. I’ve evolved and matured. I guess because I’m really involved in the church (Christian) it’s a lot of morals and it’s helped me stay on the right path. So, my high school experience was really lived through this film. We were able to act kind of crazy.

TeenHollywood: Do you think a lot of high school kids are still like those in the film? It’s 1999 in the movie.

Alexa: My school has gotten worse to be honest. With all the information on the internet you have access to absolutely everything. There’s no such thing as being young and curious and discovering stuff. They ruin all of that for people and it makes love and boyfriends and girlfriends so much less meaningful these days because everything is so overexposed so it’s really disappointing in a lot of ways. At the same time, it’s a test for everybody. Just because it’s in front of you doesn’t mean you have to conform to it.

TeenHollywood: You seem to be making the transition from kid to adult actress very well. Do you have a plan?

Alexa: I’ve been very blessed in the way things have gone. I’m really hoping I can go do more mature, adult films that are more dramatic and are the gritty kind of pieces. I don’t think it’s anything that I need to rush into because you need to have that transition. If you don’t have that transition, it throws people off seeing you go from little girl to doing a grown-up role with nothing in between. America’s not ready for big jumps. They need slow set-ups.

TeenHollywood: You’re not quite ready for Spy Kid gone sexy yet?

Alexa: [laughs] Exactly! You do little things here and there that get people used to seeing you grow up. ‘She definitely looks a little different. She’s coming into her own’. Then the film after that can be, ‘oh my gosh. Wow! She looks older!’.

TeenHollywood: Did the girls in the cast all get along and pal around?

Alexa: It was so relaxed because everybody was so comfortable with each other. Like I said, it was like our high school experience. They were off partying every night and I was there with my bag of Skittles enjoying it, having my sugar high. I think it more of a cool hang out experience for a lot of young actors; people to relate to around.

TeenHollywood: What was the atmosphere on set? Everybody jumping in and out of character or what?

Alexa: Everybody was pretty much the exact same, other than the super craziness. It wasn’t like everybody was wild all the time but relaxed, comfortable feeling so you could be who you wanted to be and not be mature all the time. It was our moment to be teenagers. The set was so chill. The vibe was relaxed and easy going.

TeenHollywood: Everybody’s careers have sort of blown up since this film was shot.

Alexa: I’m hoping it becomes like The Outsiders or the real Dazed and Confused because everybody did do their own thing after the film.

TeenHollywood: What’s up with your music?

Alexa: I just shot a rock opera film called Repo the Genetic Opera and the whole film is done in song. We’re expecting a release some time in August. I’m the girl who takes you through the film. They’re calling it ‘Rocky Horror Picture Show meets Blade Runner’.

TeenHollywood: Were there some wacky costumes in it?

Alexa: Oh my gosh! I’m bald through half the film and I wear a wig through the other half. It’s very cool. I’m so excited!

TeenHollywood: Are you writing any music or do you have time?

Alexa: It’s so hard because my focus right now is acting. I love acting and I really want to get that where I feel comfortable enough to go off and do other things and not worried about the next job. I want to get comfortable with something I am familiar with before I step into new territory.

Alexa: That’s a film I just finished shooting. It’s about a kidnapping, a true story and it’s done in one take! So we’d wake up every morning at four A.M. and shoot for an hour and a half straight. We had chase scenes and it’s all done with one camera running around. It was intense; the hardest thing I’ve ever done and we did it in freezing cold weather in Chicago. It was like 24 degrees and snowing and I’m running barefoot in the snow for an hour and a half from these bad guys.

Alexa: I’ve never put my body through a more grueling experience but I was really happy afterwards because it was something I really had to work hard for and prove myself. It wasn’t about getting pampered but about true acting and staying in character. Austin O’Brien, a lot of people know him from My Girl 2 and a lot of films when he was younger. This is his first movie back in the business after college. It’s really exciting. Austin’s a true friend of mine.

TeenHollywood: Leighton, your co-star is on TV in “Gossip Girl”. Would you go to TV if it were the right project?

Alexa: If it were something on Showtime or HBO. They have “Weeds” on Showtime. I want to do something respected and I’m taken seriously for. If I go off and do a great show like “Gossip Girl” I think people will see me as a teenager and not growing up. I can’t do that right now but, in a couple of years I can go back and do something like that. I’m still in a transition hoping people will say ‘oh, she’s turning into a young woman’ instead of ‘oh, she’s still a little girl’.

TeenHollywood: Any designers you are into?

Alexa: I’m really into Emerge, love it and I like 7 For All Mankind jeans.

Alexa: I love this band called AFI. I’m so eclectic. The top three songs on my playlist are ‘Moonlight Sonata’ by Beethoven. Second was AFI and I really love everything. I’m really into Frou Frou. Those are some.

TeenHollywood: What do you hope audiences can take from this film?

Alexa: If people can take anything from the film it’s that you are never going to get that time back. It’s kind of sad so cherish the moments that you have with your friends and with your family. Even though it might have been crazy and messed up, that was their moment and their time. Cherish the moments you have because they only last for so long.

Lynn Barker is a Hollywood-based entertainment journalist and produced screenwriter. 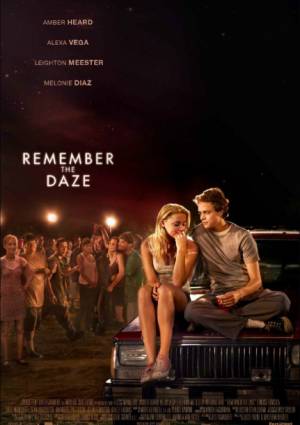 Alexa at the Premiere of ‘Remember the Daze’
New Server